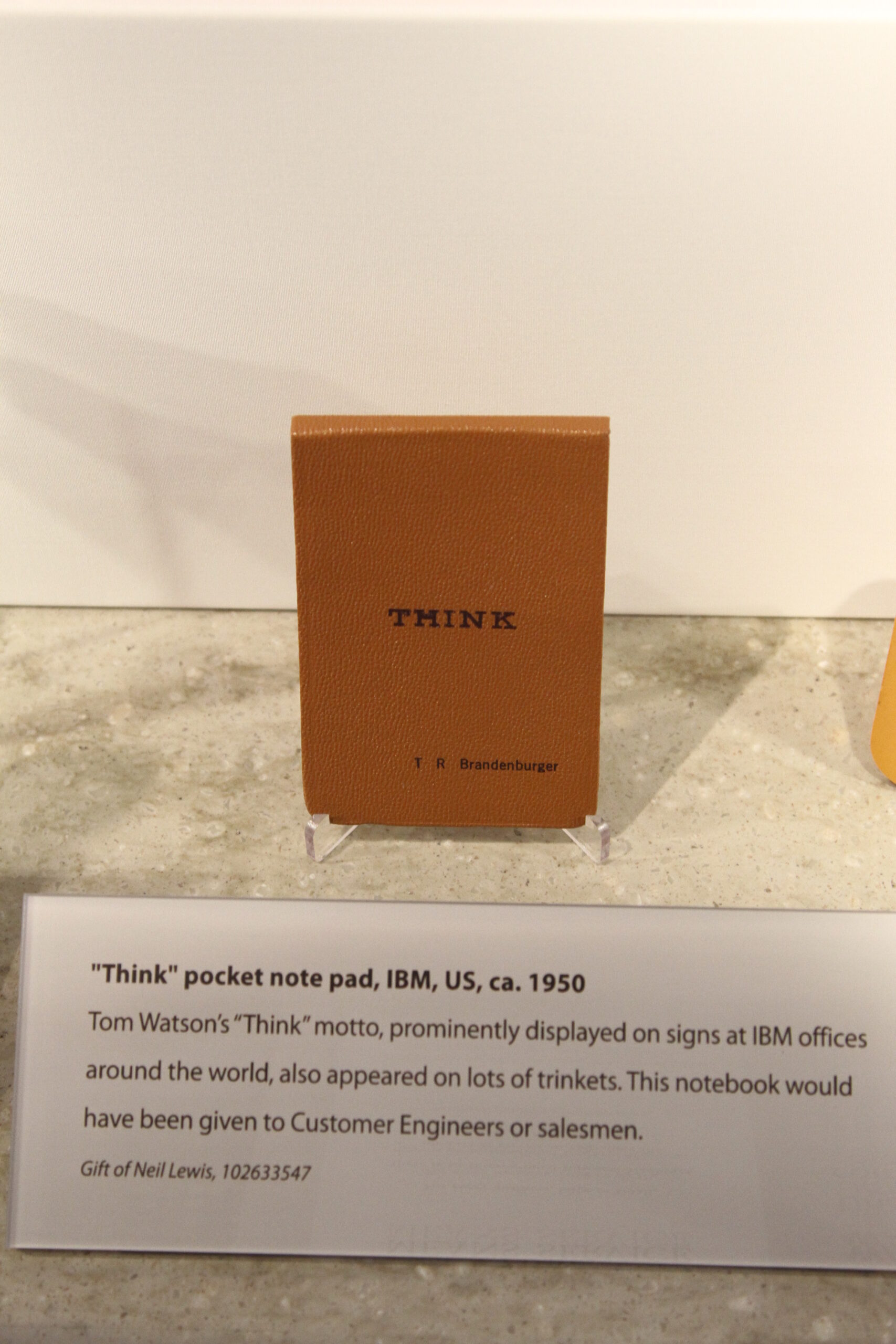 When Tom Watson brought three companies together and struggled to form a single culture he landed on the motto: THINK.

When I encountered the idea it had already built a culture that was the envy of the world at IBM, and for this ready-to-join-the-ranks young pup who was thrilled to get a job in one of the worst recessions in memory, much less with a company like IBM, it seemed the right way to do business and something I was ready and willing to throw myself into.

Then, 46 years later at the Computer History Museum in Mountain View, there it was: THINK. The thing that tied together my beliefs about business. In a museum. My first gasp: Oh my god, the things that are important to me, the things I’ve carried with me all this time, the things that have worked for me, in a museum. A museum! So, grandpa, time to ask yourself if you are living in the past.

Respect for the individual. The best customer service in the world. Excellence. These were cornerstones of THINK. They were like a Scout’s Oath. There were a lot of other things I remember, the parts of the THINK culture: Tell the truth (lying to a customer got you fired, zero tolerance, you lie and you’re gone, this wasn’t just part of the culture, it was part of the handbook), don’t complain (fix it), and great people and great companies push themselves to do “the impossible” (I took this to mean do things that make you afraid). Most IBMers will have to think a bit to bring all this stuff up, it took bumping into it at a museum to get me thinking about it again. But the first thing every sales guy or gal will tell you, they remember the uniform; white shirt, tie, preferably striped, and suit.

I thought the uniform was cool. I was cool, I thought, when I put it on. A bit like putting on my basketball uniform. When you put that thing on it was game time. You gave your best. Clever that Watson and his disciples. They got the best out of their salesforce with that uniform. Not to mention gigantic sales quotas that grew every year and the expectation that you resign if you missed making your quota two years in a row. And yes, his disciples, I struggled with what to call the people leading the company. The religiousness of the word fits, though, but not in a bad way. His name, his words, and the stories of IBMers doing heroic things for customers were often spoke of in hushed tones.

The day after I left IBM I stopped wearing starched white shirts and suits but the things THINK represented have stuck with me. Which takes me back to my first gasp. Is my life based on things that don’t work anymore?

That sound? Me crossing my fingers.